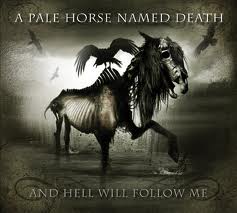 “AND HELL WILL FOLLOW ME” IN STORES NOW ON SPV/STEAMHAMMER

A PALE HORSE NAMED DEATH are kicking of 2012 with a special hometown show in Brooklyn, NY at The Knitting Factory.  The show which will take place January 6th, will also be streaming in full courtesy of APHND, The Knitting Factory and LiveStream.com.  Tickets can be purchased HERE.  The Live Stream of the concert will can be accessed at http://www.livestream.com/theknitbrooklyn.

In other APHND news, the band has parted ways with guitarist Bobby Hambel, and has announced a replacement.  Frontman Sal Abruscato commented about the lineup change.

“Due to conflicting schedules with Biohazard, Bobby Hambel is unable to tour any further with A PALE HORSE NAMED DEATH. We wish Bobby and Biohazard all the great success they deserve on their upcoming release in January 2012. Eddie Heedles has been chosen as the new replacement for Bobby. Eddie is a shredding guitarist who has worked with the likes of Corey Glover (Living Colour), T.M. Stevens, Vernon Reid (Living Colour), Sekond Skyn and The White Chocolate Experience.”

A PALE HORSE NAMED DEATH is the brainchild of Brooklyn, NY native Sal Abruscato, and sounds like Alice in Chains mysteriously sneaking up behind Type O Negative with a butcher knife while being filmed for a future episode of “Law & Order”.

“And Hell Will Follow Me” is available in three different formats: Digipak CD, 2 LP Set and digital download. The 2 LP Set comes on 180 gram vinyl and also includes a copy of the CD.  In addition the 2 LP set features an LP exclusive bonus track: “Pickup Truck”.

Like your smile when you're talking about your daughter and celebrating her first Christmas with her. Comes from the heart.

This will be great!!!