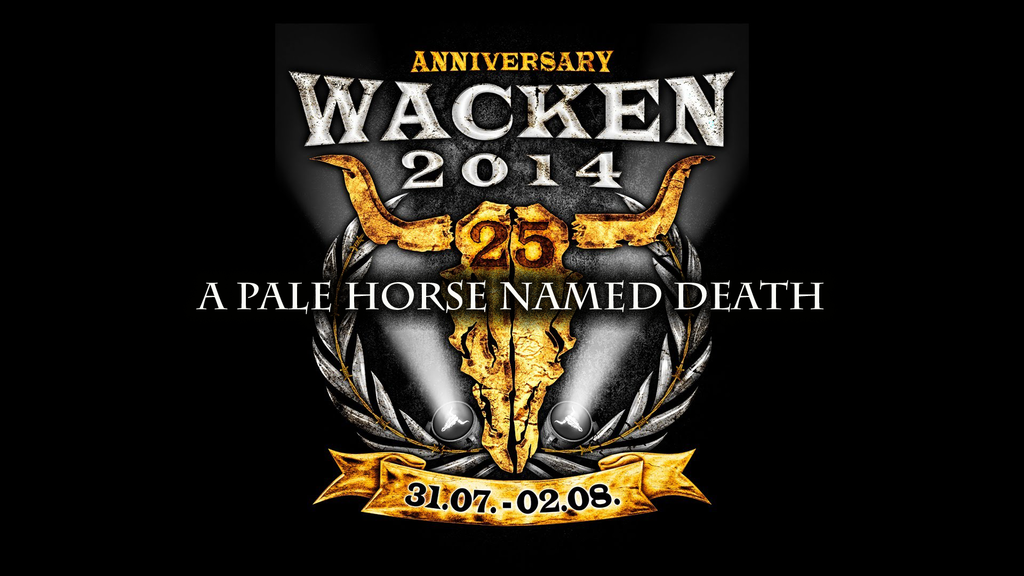 A Pale Horse Named Death is Sal Abruscato's band, so it's his musical fingerprint, and the band's sound and style is as distinct as his DNA.

While it is true that Abruscato co¬founded Brooklyn's black¬humored doom legends Type O and that he manned the kit for LoA during their watershed albums River Runs Red, Ugly and more, A Pale Horse Named Death is his brain trust. He sings and writes the songs, and stepped out from behind the drumset to play guitar. His main partner in the band is Matt Brown, a fellow Brooklynite, who is also a seasoned studio vet ¬¬a producer and engineer who has toured with luminaries like Lou Reed, Jane's Addiction and more.

In the live realm, the lineup includes Type O drummer Johnny Kelly and guitarist Eddie Heedles.
On the surface, A Pale Horse Named Death are impressive. But you'll want to dig deeper and immerse yourself in all the sonic and lyrical layers, because the band isn't afraid to plume the depths of darkness that humanity is capable of. It's murky stuff, but someone has to do it.

Abruscato has described his and Brown's working relationship as "the murdering evil version of John Lennon and Paul McCartney." The two have found a musical kinship, one caked in doom, slathered in sludge and which will make the baby fine hairs on your neck stand on end. The music they make holds an eerie chill and it will haunt your dreams. Or nightmares, for that matter. Lucky for Abruscato and Brown, that's just how metalheads like it.

The duo have followed 2011's incredible introduction And Hell Will Follow Me with Lay My Soul to Waste, which keeps the band's patented signature formula of slow, deliberate sludge and head¬down doom in tact and as flawlessly executed as ever. Lay My Soul to Waste was produced and executed by Abruscato and Brown.

Abruscato is open about the fantasy that dominates his lyrical point of view. He admits that all songs "have a line to reality…things that could and do happen everyday." But like any skilled storyteller, Abruscato likes pushing buttons. His lyrics are no different than the narratives of the horror movie playing at your local multiplex. It's largely fiction, with some nuggets or kernels of truth embedded within.

A song like "Shallow Grave" is about "killing your girlfriend, which any angry ex would appreciate." It's not advocating violence; it's saying what someone embroiled in that situation is thinking and feeling. In that sense, Abruscato is sort of like the Howard Stern of heavy metal in that he says what other people might be afraid to admit.

There's also more somber fare, like "The Needle in You," which is about losing the battle with sobriety. "In Sleeping Death" broaches the topic of suicide, while "Growing Old "is about "looking in the mirror and seeing changes, watching yourself deteriorate, and the last thing that is left is friends and family following the funeral procession."

Musically, the record matches that pallor and "will hit you in the gut." There are more harmonies this time out, and the piano is a bit more front and center, while guitarist Eddie Heedles contributed some leads. But for the most part, the formula remained largely untouched. "If it's not broken, don't fix it,'" Abruscato said, matter¬of¬factly. "We wanted to display the advancements, musically and artistically, and retain the core element." Mission accomplished!

"It's the same gloomy atmosphere," Abruscato continued. "If anything, it's darker. The artwork is darker, and people already think the first one is dark. We went further into that. The record itself, lyrics and sound, are darker. It's that progression."

He consciously wanted to avoid the sophomore slump, where the debut is lauded and the follow up pales – no pun intended¬in comparison. "I wanted to avoid the mistake of a good debut and trying too hard to 'make it' on the second record, ending up with an album full of bad radio songs," he joked. "I wanted to go deeper and more demented and touch on more twisted stories, with darker instrumentation."

Whether or not one is familiar with Abruscato's catalog, which tends to see the glass as not only half empty, but cracked and laced with cyanide, one has to wonder about his attraction to the dark side of life.

"That's what rolls out of me," he admitted. "I have nothing chipper to talk about. There is a song called 'Day of the Storm,' it's slow, like a Type O Negative song suspended in dusk. I wrote it during Hurricane Irene in 2011. Then, when we were recording vocals, it was during Hurricane Sandy. It's apocalyptic, about the end of mankind and Mother Earth winning itself back from all the terrible things we've done to the planet environmentally." The song opens with the sounds of the actual thunder and rain that spilled down from the sky onto New York City in October 2012, crippling parts of Manhattan and its boro outposts for days. "We put a mic to the window, just to have that authenticity," he revealed. In effect, life is captured in these songs.

Another song ripped from reality is "Cold Dark Mourning," which was inspired by the procession to the cemetery for the late, great Peter Steele of Type O.

Then there is "Killer by Night" which is a continuation of "Serial Killer" from first album, linking the two releases by a single but delightfully demented lyrical thread.

Overall, Abruscato's storytelling is cinematic and black¬tinted, and so is the music. He is following his heart and his ambition, since he was not afforded the chance to make the music he wanted in his other bands. He is able to transfer the ideas that evolve in his head into song on his own terms.
There is no time like the present, as he is still young enough and capable enough to be the master of his own destiny and to leave behind his own set of musical footprints.

A Pale Horse Named Death arrived with And Hell Will Follow Me. They have firmly implanted their roots in the metal scene with Lay My Soul to Waste. It’s a metal album that headbangers who enjoy a walk on the darker side of life will end up revering and responding to.