http://www.greatkat.com/03/paganini.html if you can appreciate where a shit load of the best guitarists get there influence from, read this.
Caprice No 24: on Guitar, originally written on Violin
http://www.youtube.com/watch?v=NryhTrYPgZs
To me Nicolo Paganini is a Fucking Pioneer of what we see today in Rock/Metal Ect..Enjoy…
Continue

Thanksgiving is almost here and what are you going to be listening to with the family? APHND!!! Buy the cd!!!

SO i am sitting here and its 12:19 am...As usual I cannot sleep, I been finding myself more and more inspired to write again,I have not felt this way in a while (been in school studying law). Whats weird about this is that I wrote my first song inspired by Die Alone and written in drop D, something I have never done...I also find myself writting down some serious dark lyrics which I thought I lost the passion for... Seems weird that when you think you have lost something special like an ability… Continue

I have 5 children, they always hear what kind of music I play, weather it be in the car or on the computer while I do my homework. They always ask about what band I am listening to.. my 10 year old Seb is the most interested, he's gotten into Punk , that is his fave music. His fave band is Rancid, Lars Fredrickson and Rise Against and Blink 182. Its amazing that our youth can appreciate the music we like, its the kind of thing that bonds us together. If any of you have kids that are like mine… Continue

Hey all, with the holidays looming and if you haven't picked up a signed copy, you might want to. With the way they are flying the limited edition signed copies might not be around come Xmas.

Off to see Seventh Void...

Dyed my hair, got my Bacardi and magical pixie dust sorted and Im about to take my special rocket ship into town... Not bothered about the headlining band Monster Magnet just wanna see Seventh Void.. stay tuned for pics :D

The crows pierced the clouds overhead and the stars fell in and I died. Glistening veins pouring like a river, slinking over time-worn bones and the worms. Breeding, bursting, popping inside like crackling wood. Fires of love and life smoldered to a slow smoky trail of ashes. A blinding light, trailing over fingers, twitching as they curl under for the last time. Cold steel divides the line between flesh and meat, extracting my insides. Questioning the manner in… Continue

The Dream is Dead

It was the perfect drug for the times. Mesh traded for lace, traded for nylon stockings, and the best part?…
Continue

For All the Type O fans

I am the founder and creator of the Type O Negative Army on facebook, if you are a fan please join. thanks
Johnny D

As promised, we will be having call with Sal. No fire, no hot chocolate, just some good evil speak for the holidays. The people who are in the top 10 on the Leaderboard section at 12PM EST on November 29th will receive a call in number and date to chat with Sal along with the other 10 folks who are leaders. You can ask him any questions you want. APHND, Type O Negative, Life Of Agony, Nathan's Hot Dogs, you name it!!

Here are the rules:

Ok, SO I am 18 and I meet these guys who want a drummer for their band, they heard about me through other bands, SO I decide to try out for the band. Needless to say after hearing me playing one song (Seasons in the Abyss) they want me in. days later after hanging out with them they introduce me to this band Life of Agony, at this point they still dnt know what my last name is cause I go by Johnny Demone, when I seee the last name of the singer I was like "fkn right on!!!!" The first… Continue 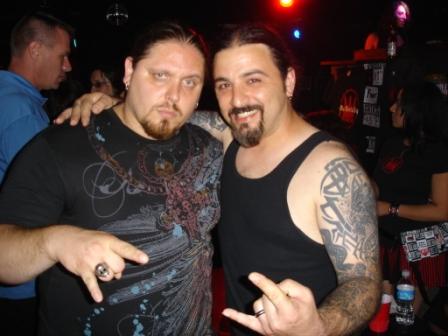 As promised, we will be having call with Sal. No fire, no hot chocolate, just some good evil speak for the holidays. The people who are in the top 10 on the Leaderboard section at 12PM EST on November 29th will receive a call in number and date to chat with Sal along with the other 10 folks who are leaders. You can ask him any questions you want. APHND, Type O Negative, Life Of Agony, Nathan's Hot Dogs, you name it!!

Here are the rules:
Continue

POLL: Which song should be the first release from 'And Hell Will Follow Me'?

Even though we are still shopping around for a record label we know that this question will come up eventually. So tell us what you think and answer the poll question below! Oh and dont just choose your favorite song, pick a song that you feel would have the most universal appeal!…

Congratulations to Patrik (view his profile here http://bit.ly/a6vo5w ) for being an AWESOME fan and sharing out And Hell Will Follow with 23 different zines! Thanks Patrik, your copy of the CD is on its way to you!!!! Stay tuned everyone for…
Continue

I decided to try to create something connected to APHND that I can share with you.Here is the outcome:
https://www.getpersonas.com/en-US/persona/329764
I'm a total beginner regarding creating personas, but I hope you'll all like it. (Or I inspire you to make a better one!)

Write to AMC Walking Dead and tell them to put APHND on their next episode.I did! Now it's up to you!

Have you been watching The Walking Dead on AMC? What do you think? Shouldn't A Pale Horse Named Death have some music on the show? We think so!

So, with Type O Negative done — for all intents and purposes — it’s
surviving members are doing their own thing now, and moving on from the
heartache of frontman Peter Steele’s mysterious, sudden, and unexpected
death.
Former Type O Negative and Life of Agony drummer Sal Abruscato is
back on the scene with a new project called A Pale Horse Named Death.


He’s joined by producer and engineer Matt Brown in the outfit, with more details available at their… Continue